Before you date a traveler, you should know that traveling comes first. In every way. Always. As a result, don’t expect her to settle in one place for the rest of her life. She will always need to move on. That’s what she does – she moves on. She moves from cultures and its people …and she moves on to new cultures and with new people. She does so because she wants something out of her life that cannot be found in just one place – perspective, understanding and knowledge. This doesn’t mean that she’s disloyal, though. Her love for travel is not in competition with her love for you – the two can never be compared that way! Ultimately, her biggest hope is to find someone to move on with. So when she feels the urge and moves on, it’s not because she doesn’t care for you. When she moves on, she does so because that fire in her eyes – that fire that you probably fell for – will die if she doesn’t. Her positive attitude and optimistic outlook on life along with that glimpse of excitement in her eyes that reveals to you that she sees a world of opportunities wherever she goes will vanish if she doesn’t move on. …She doesn’t want it all to vanish. She wants it all to stay. She wants to build on it and further develop as a person. The thrill of development is imperative to her – it’s like oxygen. She cannot live without it, but she cannot live without you and your love either. Therefore, her biggest wish is for you to follow her on her travels. 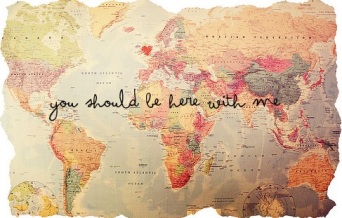 Should you fall in love with a traveler, you will have come to know someone with a truly open heart and mind; someone obsessed with diversity; someone who doesn’t see boarders; someone who sees differences and similarities at the same time; someone that breaks with social norms; someone ready to take a chance; someone comfortable with uncertainty; someone that doesn’t limit herself; someone with great independence and confidence in her own capabilities and the possibilities out there in the world; someone that doesn’t easily commit but when she does, she does so wholeheartedly; and someone with many layers all rooted in a curious and adventurous outlook on life. As a result, her curiosity for the unknown will continue to both surprise and amaze you – maybe even scare you at times. No worries though, she knows what she’s doing…but even when she really doesn’t, she’s come to know that things have a tendency to work out for the better anyway. So she’s not worried at all and neither should you be.
By now, it’s clear to you: Her heart belongs to the roads of the world, its cultures and its people. You have come to understand that the idea alone of her settling in one place for the rest of her life not only terrifies her right down to her core, it also saddens her. She, namely, knows that that would kill the fire in her eyes. Because of that, she ,simply, cannot commit to just one place. She needs to conquer the world while learning and acquiring understanding for it in order to feel the meaning of life. …And that’s just it: When she travels, she feels the meaning with life – way down in her bones. Of course, she needs comfort, stability and certainty in her life too, however, she finds this in uncertainty. She finds it there because she, through her travels, has come to understand that when nothing is sure, everything is possible.
Don’t(!) mistaken her for not having her life on track, though: Besides from being positive, open-minded and adventurous, she’s independent, ambitious and determined. She knows exactly where she wants to go: Everywhere. But she doesn’t just know this, she aims at it and she’s going everywhere – step-by-step. Conquering the world, though, takes time. Nevertheless, she’s in the middle of this adventure. This adventure called her life.

Before you fall in love with a traveler, it’s important to stress that it will be difficult to capture her attention. Moreover, it will be further difficult to hold it because she’s used to constant change and doesn’t attach herself romantically to men in order to avoid hindrances for travels. In her experience, romantic relationships don’t exist for long. Needless to say, the lifestyle of a girl who travels is not associated with a classic romantic relationship. No, because, as already mentioned, she’s always on the move. This habit of constant change makes her hard to read for someone not in the same mind-set. However, her wanderlust, fernweh and need for adventure doesn’t mean that she doesn’t want you or that she doesn’t need you – she does, believe me. So should you succeed in capturing her attention and hold it, then know this: Unless you understand her soul and share her passion and love for traveling, it’s not going to work out. She knows that. It’s only fair that you do, too. Because to her, traveling comes first. Always. She wants something out of life that cannot be found in just one place, remember… If you understand her, though, and fall in love with her and she, in return, falls in love with you, however, you become home. You become the one place in the world she always returns to. You’ll be the one she wants and needs to move on with, and you’ll be the one she seeks adventures with. She will make sure that both of you chase your dreams because she knows that the biggest adventure you can ever take is to live the life of your dreams. And she wishes nothing but a happily ever after for the two of you.

Are you searching for anything specific?